IN WHICH MY GOOSE IS COOKED

I cooked a goose for Christmas, and it was delicious, but Jesus (so to speak), it was a lot of work.

The superlative butchers at Golden Gate Meat Company in San Francisco managed to get hold of a few dozen geese from Grimaud Farms--air-chilled (hence no water weight added, as is customary with most other poultry) and never frozen: beautiful birds.  Early on the morning after I'd brought home my ten-pounder, I woke up remembering a recent experience with a duck that I had cut up in order to braise the legs, roast the breasts rare, and make a nice stock from the back and other scraps; and I thought, Well, that would be a dandy way to deal with the goose.  I also remembered, however, that the anatomy of that duck had been sufficiently different from that of birds I was more familiar with that I had really been digging around and doing some damage to its lovely dark flesh.  Moreover, the connective tissue holding the joints together had been extremely hard to slice through.  Now I was looking at a critter five times bigger, with pretty much the same anatomy, and tendons probably five times tougher.

And so I'm thinking, Time to call the guys at Golden Gate.  Sure enough, they'd be glad to cut it up for me.  Therefore, as sheets of rain slashed across the Embarcadero and the Bay at high tide splashed against the piers, I made my way through a gray eight a.m. Sunday to the Ferry Building to find Golden Gate--Closed Sundays?  Naw!  Who had I been talking to, then?  I banged on the steel gate, hollered through it.  I could see a guy mopping inside, but he didn't look up.  I banged, I hollered.  Finally he saw me and disappeared into the back.  Soon appeared one of the butchers I recognized--the one, in fact, who had answered the phone.  Padlocks click, in I goes, a discussion of the surgery ensues.  Ten minutes later, one bag contains drumsticks, thighs, and first joints of wings with a knob of breast meat attached to each; another has the whole breast, un-split; and a third the carcass, wing tips, neck, giblets, heart, and liver--all but the last the makings of my stock.  With Christmas Eve dinner not till the next night, I could make stock that day and let the fat rise in the fridge overnight.  Also I could do my braise.

I thought I would brown the meat and bones on top of the stove.  Not a good idea.  First of all it took six frying pans, all six burners.  Second, despite my assiduous drying, the fat-spatter was unbelievable.  Goose napalm.  So, a five-hundred oven.  Lotta spattering there too, of course, but at least it was contained.  Also in the oven I browned onions (skin on), carrots, and celery; together, for both the braise and the stock.  I poured off the rendered fat--yeow--more than three cups.

I gave the stock a two-hour head start so I could use some of it in the braise.  I managed to fit the meat into two large cast-iron skillets, then wedged in the now-caramelized vegetables, added some stock, thyme, and bay, discovered that my back-yard parsley was dead, and poured half a bottle of Loire (unoaked) chardonnay into each pan.  Up to a simmer, and into a three-hundred oven.  Wearing this great little timer around my neck, I could "remember" to check on everything once an hour.  Barely bubbling, just right.

After four hours, the goose drumsticks were still so hard I could have cracked somebody's skull with one.  After five, they were merely inedibly tough.  Good thing this was the day before.

Finally, after six and a half hours and several addings of water, they began to soften, and that was enough for the day.  I put the meat in a bowl in the refrigerator and added the braising liquid to the stock pot.  By now the carcass was breaking apart, which was good--more gelatin in the stock, more unctuosity in the sauce to come.  I fished out all the big stuff and smushed it hard in the strainer to squeeze out whatever juice I could, then strained the rest, again smushing anything smushable to a paste.  All the solids could now go to compost and the beautiful, though very greasy, stock to the fridge.

Christmas Eve morning, the fat having nicely congealed, I scraped it off the top of the stock.  What lay beneath was a sparkling-clear consommé.  Beauty, thy name is stock!  It did need to reduce by about half.  No problem.  That done, I put the goose in a bit of it and put that again in a 300 oven.  After an hour and a half or so, the meat was falling off the bone; I took that out and kept it warm.

When the oven reached 450, I roasted the breast to an internal temperature of 145.  The skin was tight and crisp, the meat bright blood-red.

I took a quart or so of the stock to reduce further for a sauce.  I julienned an orange peel, blanched it, and added that.  I just happened to have three kinds of oranges on hand--a regular navel, a Cara Cara, which has flesh sort of grapefruity-pink, and a Clementine.  I cut out "filets" from the first two and just sectioned the third because it comes apart so nicely, and set those aside.  The juice left over I added to the sauce, followed by a wee tad of butter for viscosity and what the hell.  I completely forgot to chop, cook, and add the liver.

After resting it for forty minutes, I carved the breast meat off the bone and sliced it crosswise into thin medallions.

Braised meat went on one end of the platter, rare breast on the other.  I chucked the little orange quarter-moons here and there amidst both.

It was very, very good.  But once, I think, will have been enough.
Posted by expres at 10:06 AM No comments:

Email ThisBlogThis!Share to TwitterShare to FacebookShare to Pinterest
Labels: IN WHICH MY GOOSE IS COOKED

The Goose Is Cooked 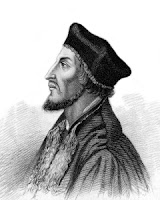 The Goose Is Cooked


More observations about the reformer, Jon Huss, the man with foes in high places. The movement that was to become the Moravian Church owes its inspiration and beginning to Master Hus.

In the last Moravian post we learned that Hus, a Roman Catholic priest, was judged a heretic and sentenced to a cruel death.

Hus went as requested to the council at Constance. He was optimistic, sending a letter to friends joking that 'the goose is not yet cooked and it not afraid of being cooked.'"

The council before whom he stood in judgment made an offer to Hus - "recant or die." Hus turned his face from his judges and prepared for his final journey on earth.

The council vested Jon Hus in Eucharistic vestments and defrocked him. His vestments removed with appropriate curses which concluded with the words, "we commit your soul to the Devil". A paper crown was placed on his head with a foul inscription and marched to the place of death.

"He was bound to the stake with a sooty chain wrapped around his neck. Wood was piled to his chin ... He was given one final chance to save his life by recanting all his errors and heresies ..."

Hus is recorded to have said, "God is my witness that ... the principal intention of my preaching and of all my other acts or writings was solely that I might turn men from sin. And in that truth of the Gospel that I wrote, taught, and preached in accordance with the sayings and expositions of the holy doctors, I am willing gladly to die today."

"The signal was given. The executioner set the pyre ablaze. From the smoke and flames that shot upward into the summer sky, Hus's voice could be heard once more, this time in song. 'Jesus, son of the living God, have mercy one me.' Master Jan Hus sang these words three times. The goose was cooked. He died singing."

That is not the end of the story.

﻿﻿In 1999 Pope John Paul II told an international symposium, "Today ... I feel the need to express deep regret for the cruel death inflicted on Jan Hus.' He commended Hus's 'moral courage in the face of adversity and death." -- Portions adapted from Issue 68 (Vol. XIX, No 4), of Christian History magazine.
Posted by expres at 9:57 AM No comments:

Email ThisBlogThis!Share to TwitterShare to FacebookShare to Pinterest
Labels: The Goose Is Cooked

the goose is cooked

Hello fellow friends from all around the world, welcome.
Posted by expres at 6:50 AM No comments: